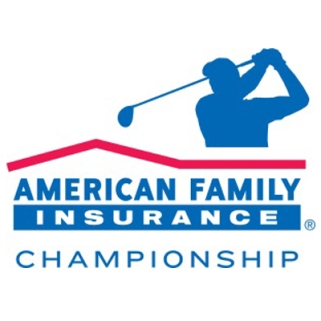 I’ve been writing and tweeting about the intersection of sports and social media for more than five years. My day job brings me alongside the sports industry often — but never as close as the inaugural American Family Insurance Championship — a PGA TOUR Champions event held June 24-26 in Madison. Wis.

When my company announced the tournament dates more than a year ago, I quickly raised my hand to lead social media activities. This was a chance to pursue a dream — something my employer knows a little about.*

To do this, I had to step outside the comforts of my little blog and put my experience covering the sports and social media (#SMSports) world into practice. It involved developing a detailed strategy, syncing with the PGA, tournament staff, volunteers, sponsors and media. There were also crazy-long days with little sleep, and lots and lots of walking.  . 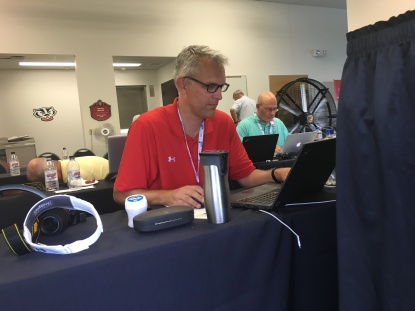 That’s me at the AmFam Championship Media Center with all the essentials: laptop, iPhone charger, coffee, sunglasses, gum, DSLR camera and visor.

Now that I’ve had a little time to reflect on my experience, I wanted to share my takeaways from running social media at the inaugural American Family Insurance Championship.

For AmFam Champ, I knew we had the opportunity to do more than other PGA Tour Champions event had done in social media. Our pre-tournament research showed the Champions Tour always led the way from a social media conversation and share-of-voice standpoint. I wanted to change that. And I want to be clear — that’s not a knock on other tournaments or the PGA Tour. That was my confidence in the community we were building online and offline in support of this event. (Stay tuned for how we stacked up.)

Part of the planning meant creating content that could be scheduled ahead of time or used at any time. I couldn’t have a designer with me at all times, so I worked with one ahead of the tourney to create customizable templates. These allowed me to pump out original, branded content (like the graphic above) to showcase some of the Tour’s top players, as well as promote tournament tee times and other news.

Strong, consistent branding was also a must — and something to put in any social media plan. For tourney week, I leaned heavily on these templates and the content calendar for guidance — but only up to a point. See next lesson learned.

2. Plan for the unexpected. Live sports is unpredictable. Throw fan interaction, weather, emotion and a host of other intangibles, and you have the opportunity to quickly get thrown off your social media game plan.

But if you expect the unexpected, it can deliver pretty special moments. Easier said than done, right?

In the flurry of activity on Day 1, I snapped the photo above of two spectator chairs near the 9th hole. One of our tournament mantras was, “Golf is back in Wisconsin,” and — to me — this image just fit the bill perfectly. It helped that Packer legend Brett Favre would be on site the following day, too, and so on a whim, I tagged the @Packers in the photo on Twitter. Later, I noted the team retweeted this photo — one of our most engaged tweets of the week.

All tucked in. Tomorrow, we play. pic.twitter.com/ReQVTfjap2

The night before tournament play began, I noticed a slew of player bags in a spot just off the media center where I was stationed. I snapped this picture near the end of the day but wasn’t sure what to do with it. Sometimes your eye tells you things your mind isn’t ready for. It didn’t take long for the tweet to find me, and it was a great way to close the day before tournament play.

Also before play began, AmFam Champ host Steve Stricker toured the American Family Children’s Hospital — a beneficiary of the proceeds from the tournament. That day also happened to be National Selfie Day. While I’m not a fan of jumping onto trending topics, this felt genuine and true to the tournament’s brand — as well as Steve’s. And the photo (see tweet above) was perfect.

The lesson here is to be on the lookout for the unexpected. You may not recognize their value right away. But these moments — small or large — can really make your social media presence stand out, and provide your followers and fans something they can’t get anywhere else. That’s true for sports, or insurance, or breakfast cereal.

3. Be a jack of all trades. I’ve had the fortune to do many different things in my career that made this role easier. I’ve been a TV reporter and producer, video photographer and producer, magazine editor, and social media manager — to name a few.

Everything I learned in these roles helped, but I also made sure to pick up a few extra skills, like brushing up on Photoshop, and getting my hands on a nicer camera — one that was WiFi compatible and talked to my phone. (Seriously, that’s the best invention ever for covering live sports!)

"I'm excited to start watching golf and see how the guys like the course." https://t.co/5V3XrYvm06 #AmFamChamp pic.twitter.com/wIeJk3D0MB

The photo above was one of many I took with my DSLR camera. You can’t do everything with an iPhone, and I couldn’t always rely on our professional photographers or the PGA to get me real-time images. So I didn’t go anywhere without my Nikon (a Christmas present from my family, by the way), and created my own steady, reliable flow of visual content.

Take some time to add skills to your personal toolbox. They’ll help you appreciate the work others do, but will also provide you with crucial abilities that can serve you well in the future.

That being said, sometimes an iPhone photo is OK, especially when you can do some on-the-fly editing with filters. Our on-course branding made for some amazing visuals, and this was just one of many photos (and tweets) that made me proud.

4. Learn the lingo. I’ve watched a lot of golf on TV and played the game my whole life. But you need more than that before you can feel confident leading the social media coverage of a live, professional sports event. So I did my homework. I studied the social media feeds of the PGA Tour Champions and other tournament stops.

.@gene_sauers, who recently switched to a left-hand, low putting style, had 26 putts in Round 1 of the #AmFamChamp. pic.twitter.com/RzIULEAl6j

I incorporated my knowledge of the #SMsports industry into my approach, too. Because what works in football or basketball, can also work in golf.

Fortunately, leagues and teams have access to a library of statistics. Use those to create compelling, interesting content. Report on the action, but don’t just give play-by-play. Add value and use terms fans are used to hearing at the game, on the course or on TV.

But also be social. Use emojis, compelling images and lingo that’s familiar to socially-savvy fans.

5. Get some help. One person can’t do it all — at least not well or effectively. I was fortunate to partner with an energetic and talented social media pro — Jason Waller. We quickly established our own content swim lanes. We reviewed each day’s calendar and the opportunities ahead of us — together — but then went our separate ways to divide and conquer. And, we both adapted on the fly — Jason perhaps even more than me. 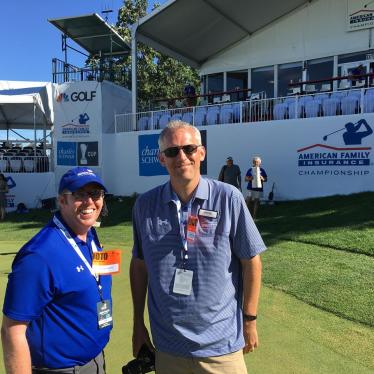 He was the master of behind-the-scenes content, showcasing our fans, volunteers, employees and entire tournament experience.

It was fun to watch Jason blossom over a week’s time doing this. It will serve him well in the future, too. Thanks, TBG.

We also tapped into other writers, photographers and videographers — all had other roles but all played a part in the overall success of the tournament’s social media presence.

So how’d we do? It was the first year for this PGA Tour Champions event, but you wouldn’t know that by the turnout. More than 56,000 fans attended, and the tournament raised close to $1 million for charity.

And remember those social media goals established in the strategy? Well, we met and exceeded them. The tournament’s social media accounts owned 43 percent of all related retweets and 25 percent of all shared social content. Strong Facebook and Twitter presences powered this surge, led by those branded messages I mentioned earlier, but also by strong video content and on-the-course coverage.

It was a fantastic experience for me — and I appreciate even more the hard work of those who do this every day.

I’m already gearing up for the 2017 American Family Insurance Championship, and will continue to seek inspiration from this community so willing to share ideas and expertise.