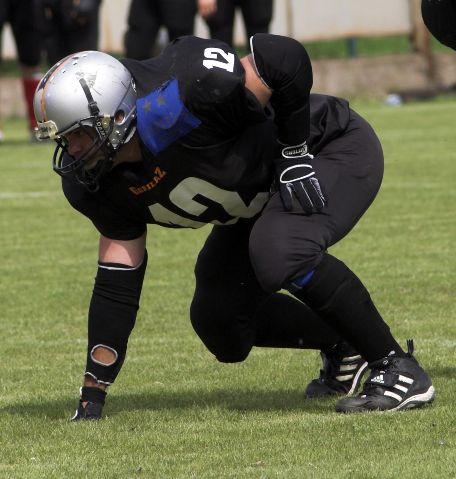 No matter how your favorite college football team finished in 2010, today is heralded as a day of hope and excitement for fans across the country.

College football fans participate, too. They’re hitting fan forums, Twitter and Facebook to talk up their school’s 2011 recruiting class. For some fans, it’s a process that begins months – even years – earlier, when talk of a recruit’s interest sparks discussion on those social channels.

The signing process is another opportunity for fans to interact – sometimes too closely – with these stars of tomorrow. Many athletes invite anyone to “become a friend” on Facebook or follow them on Twitter.

Good idea or bad, college football fans benefit from the all-access pass that can come with social media. The athletes benefit (I guess) by getting a pulse of their school’s fan base, and from the potential praise and attention heaped upon them.

Not if you’re Philadelphia (Miss.) High LB C.J. Johnson. His recruitment process – one that pitted Mississippi State against Ole Miss – was ugly. Social media didn’t help. In fact it was so bad, Johnson pulled the plug on his Facebook page, telling his fans:

“This is my last Facebook post and I’m gonna leave facebook with this. Linda Johnson has never worked a s a house worker making 100,000 dollars a year and I will not be a Mississippi state bulldog and I’m not considering Mississippi state anymore bc you have constantly comment on my page send me crazy inboxes and has made my recruiting experience a living nightmare. Goodbye facebook.”

This kind of “fan” behavior is becoming more common, and it’s unfortunate. I expect (OK, hope) to see some guidelines surface soon for high school athletes to incorporate into their social media usage.

The problem is, colleges have no control over potential recruits. Zero. And high school administrators have almost less influence. It will likely need to come from individual coaches in the form of team rules or guideliness. The NFL already imposes restrictions on social media, so there is some precedent.

For fans, there’s no excuse. If you’re going to follow or “friend” a high school athlete, do so at arm’s length and with a positive attitude. If he or she doesn’t ink an LOI with your school, so be it. Just because they accepted your “friend” request or you follow them on Twitter does not permit you to hound, ridicule or berate high school athletes publicly. And yes, Twitter and Facebook are VERY public places now.

Being a fan has its priviledges. But the nonsense C.J. Johnson and other athletes have had to endure is not one of them.

Hosting the AFC championship game has become old hat for the Pittsburgh Steelers. They’ve done it 15 times now – more than any other NFL franchise.

So how could the Steelers front office make the matchup with the New York Jets any more awesome? How about snapping a technology-inspried, 360-degree, high-definition photo of the entire stadium?

Hats off to the Steelers (and McDonald’s, I guess) for making it happen with the GigaPixel FanCam. It’s a great way to engage fans – not only during the game – but on social networks like Facebook and Twitter (as well as e-mail).

The image itself took between 5-7 minutes to shoot. Fans can “navigate the panoramic image and look around, as if they were standing in the middle of Heinz Field for a frozen moment of time just before the opening kickoff of the 2010 AFC Championship Game,” according to Steelers.com. But the best part is finding yourself in the picture and tagging yourself – similar to how photos are tagged on Facebook. However, with this image, the resolution is a little higher – as in 5 billion pixels high. At publication, several hundred tags had been added to the image.

Nice work, Steelers. Winning games is tough, but innovating with 70,000 people – all at the same time – is even tougher.

“Ray Anderson [NFL senior vice president of football operations] warned teams if any illegal acts occur during this weekend’s games, past comments will be considered in evaluating discipline.”

Though not playing this weekend, Jacksonville Jaguar RB Maurice Jones-Drew quickly replied to Schefter’s post with this:

Jones-Drew’s tweet is another shot at the NFL – oft referred to as the No Fun League – for its crackdown on players who show a lot of emotion, character or celebratory actions during games.

The Pittsburgh Steelers fired their own salvo of sorts at NFL officials not long after.

Just hours before the Steelers were to take on the Baltimore Ravens in Heinz Field, the team’s Facebook page posted this interesting item (courtesy of their research team I’d imagine):

NFL players – Steelers ROLB James Harrison inparticular – have been hit with a barrage of fines and flags for illegal hits this season. Some of his teammates and even other players in the league came to his defense following the fines.

Now it appears the Steelers front office – or at least its marketing department – is doing its part to rile up fans with that post today.

What’s especially interesting is the timing. It was posted early enough in the day where many ticket holders would be able to see it, and would thus be prepared when they enter Heinz Field and begin cheering for their beloved Steelers – or perhaps more importantly, boo the officiating crew.

Is the post a little off-limits by the Steelers? It definitely stirred the pot with fans, based on the more than 1,000 comments left on the post. I think it’s great info to have for fans – nothing erroneous was reported.

And what of the subject of trash-talking? The NFL is putting its foot down for sure. But it’s hard to cool the emotions around a divisional playoff game when SO much is at stake.

And thanks for being a fan.

It was a collision bound to happen. And no one got fined for helmet-to-helmet contact.

Social media and sports bumped into each other, way before “Web 2.0” was thrown around. When did it happen? No one can really pinpoint a time – late 90s perhaps – when those first fan forums sprouted. They were led by average Joes who wanted to annonymously rant about their favorite team. You joined these networks of like-minded and not-so-like-minded fans to hear what everyone was saying about a certain player, or last weekend’s game, or the new coach that just got hired.

They flourished and became mainstream. They generated news, sometimes, or buzz at the very least. They got noticed by teams, by the traditional media and by more and more fans.

It wasn’t long before mainstream social networks – like Facebook and Twitter – took hold, and sports piled on like a scrum for a loose ball. Everyone wanted a piece. Everyone wanted to come out holding the ball.

And why not? It was an elixir for today’s uberfan – that perfect mix of jack and coke or cold beer with pizza. Today’s social media channels are souped-up versions of those first clunky fan forums. They can enhance your fan experience and connect you with your favorite team or player like never before.

Traditional fan forums are still around, but they’re being supplemented and enhanced by Twitter and Facebook. The whole sports fan experience has changed – and continues to evolve.

So what? Well, that’s where I come in. And why I created this blog. It’s here where I’m going to attempt to highlight some of the many ways social media affects the sports world – from the simplest pee-wee football game to a 70,000-seat stadium on NFL Sunday.

I’m not a sports expert. I’m an average fan like most of you. But I do live and breathe social media, and I’ve been a writer for nearly two decades. So, I hope I can provide a different perspective – one that you won’t read anywhere else.

Pretty lofty goals, but give me a chance. And if you have a topic you’d like to see examined here, drop your idea in the comment section.