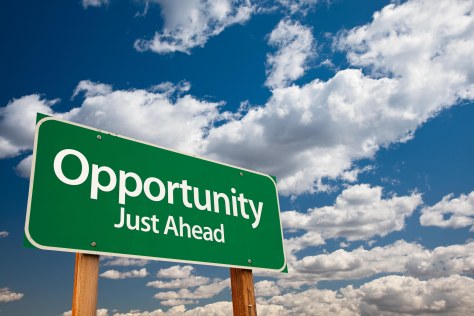 The term is so tired, I even had to use a tired stock image to emphasize my point.

This multipurpose word uplifts and undercuts from one sentence to the next. Consider “land of opportunity” — a prideful, slogan-ish term with patriotic undertones. We stand proudly behind the idea that we live in a vast land of opportunity.

Contrast that with the opportunity to do better — as in, what you originally did kind of sucked.

Opportunity in this sense is a much-maligned, corporate-fueled term that lands at the top of many hated buzzword lists — including this one. As a veteran of the corporate world, this is an overused, lazy way to offer feedback.

Social media presents tremendous opportunity, too, and has for years. But is it promise-filled or buzzword-y? We’re into our second decade of the social era, and social media users and professionals continue to evolve — sometimes at odds with each other. And opportunity continues to mean different things to different people, especially in social media.

Last month, Beyoncé shared details on Instagram about her new single, which included reference to Red Lobster in one rather off-brand lyric. “When he f**k me good I take his ass to Red Lobster.”

The internet sat back and waited for Red Lobster to respond. I mean, it was practically handed its own Oreo Moment, right? That opportunity to cash in on a pop-culture-moment-in-time that would endure their brand to marketing lore and endless sales.

But Red Lobster did not respond immediately. No clever tweet. No Oreo Moment. It took an internet eternity of eight hours to respond.

And that just wasn’t good enough — of course — for the Twitterati or for marketing second-guessers. The vultures quickly circled.

“The overly conservative brand is being left behind while the non-stop train known as the internet continues to move,” wrote Jay Lled, social media manager at creative agency 180LA, in this AdWeek piece. “Authentic communication in advertising is crucial for brands trying to create a deep, meaningful connection with their audiences.”

Was Red Lobster’s so-called missed opportunity truly a mistake — something damaging to the brand and reflective of the quality of its food and service? Or was it another example in the long line of faux criticism amplified by the piling-on effect of social media?

Of course, this is a ridiculous argument. Red Lobster will not succeed or fail because it “missed out” on creating a tweet that capitalized on a pop-culture event. It will succeed or fail based on how well it delivers on its primary mission — the quality of its food and service. (Interestingly enough, Red Lobster sales actually spiked 33 percent after the release of Beyoncé’s single.)

Yes, Mr. Lled makes valid points regarding diversity of social media teams. He should also reference the pressure facing social media managers who, on top of running their teams, must be experts in public relations, content marketing, media buying and the now 24/7/365 pop culture news cycle — not to mention endure endless negative reaction to promoted content.

It’s ridiculous, not to mention unrealistic, to put all of this on a social team — even one afforded the luxury of content teams, agencies and ad budgets.

Let’s be real. Red Lobster’s social media team did not “fail its audiences.” The internet wants you to think that, and so do the publications that eagerly pile on when these non-stories arise. Red Lobster can only fail by delivering a poor customer experience. And pithy tweets about pop stars have nothing to do with that.

Unfortunately, there’s a fixation with scoring a content home run, despite the fact marketers are actually losing sight of the incoming pitch. My friend and respected digital marketer, Augie Ray, sums up this content craze:

“Instead of getting people sharing because the brand does something clever but vapid, we need to focus on how to encourage peer-to-peer sharing and dialogue about the product, service or mission,” Augie told MediaShower earlier this year. “People don’t talk about Nest’s content, they talk about the product. People don’t praise Uber because it has a viral video but because it offers a game-changing experience.”

Sports and social media are not immune to this phenomenon. Industry pros share ideas and debate at length over the quality and effectiveness of social content in sports. We even chat about it every Thursday night during #SMSportschat. It’s often a healthy, open and honest discussion.

Remember: #smsports is a community. It is a place to share ideas, not to tear down what other schools don't do.

Each school has challenges.

So it’s my hope the #SMSports community does not fall into the social media marketing trap — one that constantly second guesses and snarks. There’s enough of that on the internet. And this is truly a community — one that has enriched my life and career — and I would imagine many others. (Thank you, Chris Yandle, for the reminder.) It’s also helped sustain this blog for five years.

Sports-related or not, when it comes to social media content … walk a mile in someone’s shoes before you rush to judgment. Understand that social media is one small part of a team or league’s brand. And, in some cases, sports ranks low in a college or university’s identity.

So just like you do your favorite team, cheer the wins and encourage constructive dialogue and discussion around the opportunities.