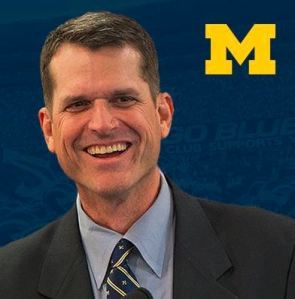 Jim Harbaugh joined Twitter right after his hire as the new head football coach of the Michigan Wolverines.

If Jim Harbaugh’s latest attempt at Twitter is any indication of how he’ll run the football program at the University of Michigan, Wolverines’ fans have a bright future ahead.

Coach Harbaugh started a new Twitter account this past week — @CoachJim4UM — and quickly amassed more than 125,000+ followers. His first (and, to date, only) tweet garnered more than 4,600 retweets.

It’s an exclamation point on Michigan’s attempt to turn things around in Ann Arbor. This storied program hasn’t had much to tweet about lately, and its coaching decisions, on-field performance and recruiting have left fans restless and looking for a hero to rally behind.

Rival Ohio State, meanwhile, won another Big Ten title this season and plays for an eighth national title on Jan. 12. Buckeyes coach Urban Meyer embraces Twitter, and ranks among the top college football coaches when it comes to follower count. And at Michigan, keeping up with — and beating — Ohio State is always a goal. It’s likely one of the reasons Harbaugh returned to Twitter as part of the new gig with his alma mater. (Yes, he tried Twitter before with … some interesting results.)

Becoming an active Twitter user doesn’t equal success on the field or recruiting trail, but college coaches who embrace it can find advantages. Just like a CEO running a company, coaches lead a high-profile brand. Being absent from social media isn’t an option anymore — for CEOs or coaches.

“Nobody should be more passionate about a program than the head coach,” writes Kevin DeShazo, Fieldhouse Media founder and social media consultant to many collegiate coaches and athletic departments. “Every day you aren’t using social media to share that passion is, in my opinion, a missed opportunity.”

Doors are open at Schembechler Hall. Look forward to getting knee-to-knee with the current team. Players, stop by and say hi!

Michigan football needs help everywhere, especially on the all-important recruiting trail. The Wolverines rank last among Big Ten schools in 2015 recruiting, according to 24/7 Sports. Some experts believe Harbaugh’s hiring can stimulate interest in the program and lure blue-chip recruits back to the Big House.

The front page of college sports is no longer ink and paper. It’s 140 characters. It’s hashtags. It’s trending topics. Social media powers a large part of the interest in programs, in coaches … and in recruiting. Case in point: Trending activity around the recent Army Bowl and Under Armour All-American games, which included player commitment announcements throughout each broadcast.

Fans, parents and athletes tune into social activity — like they do SportsCenter or the sports page — except now they can participate. And coaches should, too. (Just don’t take Twitter lessons from Jim Mora right now.)

“If hyper-competitive coaches can use any new service to gain an edge over a rival, they’re going to,” writes Christopher Wilson of Yahoo News. Social media creates an advantage only because some coaches are reluctant to use it as a marketing tool — as an extension of their programs and personal brands. Pass on this opportunity and miss out — not necessarily on what draws me and other sports fans to social media (conversation, content) — but on reaching a large audience quickly and efficiently.

“[Social media is] your chance to tell your story directly to recruits and parents of recruits (along with fans, the community, the media, alumni and more),” DeShazo says. “Nobody can tell that story better than you.”

And nobody’s more excited to have Jim Harbaugh on the sidelines than Michigan fans. Coach Harbaugh’s Twitter presence can help him build an even stronger program, connect closer with fans, and sell his brand to top-notch recruits year-round.

So keep tweeting, Coach. And thanks for being a fan.