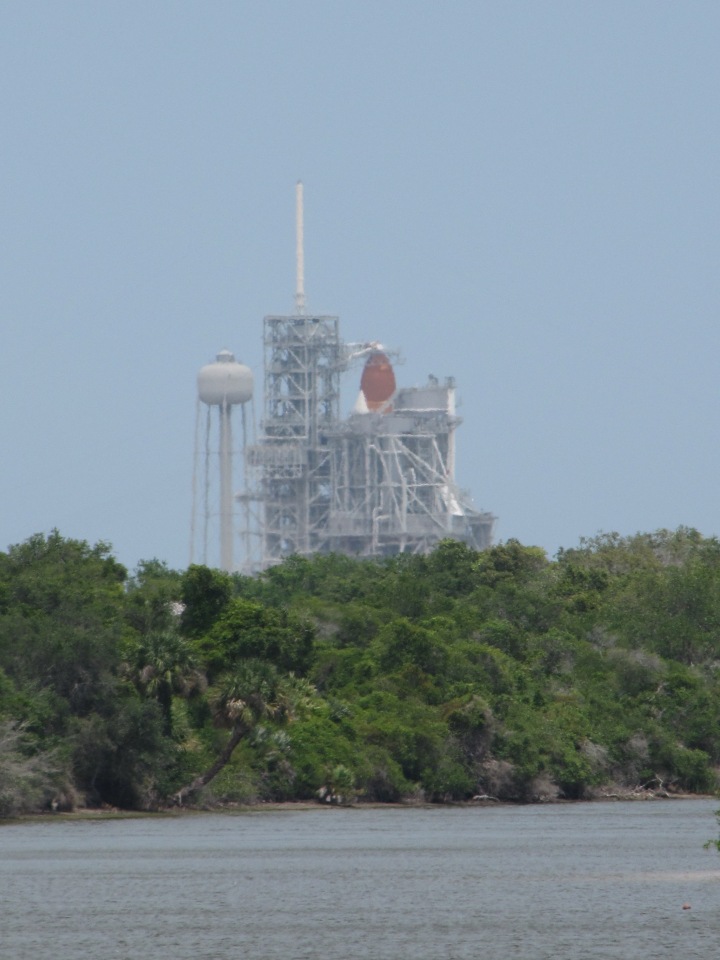 Tweetup tweeps didn't get to witness Endeavour's launch, but they earned a valuable and unique NASA experience nonetheless.

My NASA Tweetup experience is just about over. I’m sitting in the Orlando airport about to leave Florida with a suitcase full of NASA swag and souvenirs and a brain and spirit full of amazing experiences.

Of course, as with Endeavour, my departure from Florida is delayed, albeit a few hours only.

It got me thinking about some of the things said and heard around the Tweetup Tent (or Twent) this week, as our crew went from unadalterated giddiness to complete bewilderment, frustration and sadness. Some myths need to put to rest, though, as friends and tweeps alike asked some pretty interesting questions about my experience (post-launch delay).

True: I didn’t get to see Endeavour lift from the launch pad at Kennedy Space Center (or the “money shot” as it was snarkily referred to by one anonymous tweep this week).

False: I’m bitter about not getting to see the launch in person.

I still contend being selected to attend the STS-134 launch festivities was like hitting the lottery. I got to see, feel, touch, experience things not many others in the world ever will. And in just a few months time, when the shuttle program is officially retired, this pre-launch party will be placed on a shelf with other NASA rituals.

True: NASA uses Tweetup participants to drive positive buzz about the U.S. space program at a time when public interest and support is significantly wavering.

NASA’s public affairs office should get credit for orchestrating a buzz-worthy social event with many moving parts. Each participant is encouraged to speak with their local newspaper or TV station about the Tweetup. I did just that with my local NBC affiliate and major metropolitan newspaper (even if both failed to mention this blog by name).

NASA invests valuable resources providing Tweetup participants with rare, behind-the-scenes access to Kennedy Space Center. The things our group got to see are not on any public tour. We heard from very busy people who were deeply involved in getting Endeavour into space. They took time to talk to our group, and I’ll always cherish knowing that.

But to argue that NASA Tweetup is a PR ploy misses the point of social media entirely. First, NASA selected this group randomly. Had it been more orchestrated, we would have ALL been pro-space program bloggers and tweeters. Before NASA Tweetup, I’d never written or tweeted a word about our space program. Ever.

It also misses the point because Tweetup is more than getting the word out to our millions of collective followers, or getting TV and newspaper stories written about each of the Lucky 150. It’s about building and strengthening a social community that is one-of-a-kind. I met some special people this week, and I won’t forget them anytime soon. We’re already planning a reunion, and the shuttle hasn’t even launched!

True: Space is hard. Tweetup-ers knew the risk of a delay was possible, if not likely.

False: Tweetups are not a good idea given the volatility of launch schedules and timelines.

Witnessing the launch would have merely been icing on the cake this week. I mean, I saw the inner workings of our coveted space program. I won’t forget what I saw. Ever. The visit to the Vehicle Assembly Building bordered on a religious experience. What a technological marvel.

We were simply fortunate to get a front-row seat to the party. And experience it with 149 others just like us, yet so very different.

NASA has always been a technological pioneer. The same is true socially. Tweetup only strengthens NASA’s trailblazing reputation.

Why else would 700,000 people jam the Space Coast of Florida for a brief glimpse of Endeavour on a cool, cloudy Friday in late April? They want to be part of something amazing, life-changing and inspirational. That’s what our space program is all about. And I was lucky to witness it first-hand, even without a launch.

Thanks for following along on my Tweetup journey.

Publisher’s Note: Look for new FourthAnd140.com posts on the intersection of sports and social media soon.)