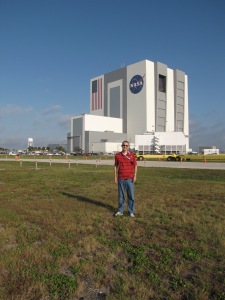 I could blame my lack of descriptors at today’s (April 28, 2011) NASA Tweetup on a lack of sleep, a lot of science thrown at me, or the sweltering Florida heat.

Instead, I’ll place credit where it belongs: With the amazing people at NASA.

Wow. (How’s that for a thoughtful description?)

It actually started weeks ago following the selection process. Since then, the communication, friendliness and openness has been sensational. By the way, these people were within an eyelash of getting furloughed while Congres floundered on a budget spending bill.

Today’s Tweetup was very well-coordinated considering we are operating in a tent in the middle of Florida’s swampy east coast. It was in the low 90s today, but our air-conditioned Tweetup tent was comfortable, hospitable and right within walking distance of all the Kennedy Space Center action.
While we learned a lot from NASA’s talented lineup of speakers, much of it was a bit over my head, I’ll admit. The one theme shining through all the science (waaaaay over my head), research, project management, communication and coordination know-how was something you don’t learn in any college or university.
Passion.
It shone through in each of the NASA speakers and in our Tweetup hosts. There was passion in the words NASA’s chief scientist, Waleed Abdalati, who encouraged NASA Tweetup crowd to keep tweeting about the space program, even when the shuttle program retires.
“Spread the word, appreciate this, feel it,” he said. “We will all reap the benefits through hard work,” Mr. Abdalati told us. “We will – because of what we saw, heard and experienced today.”
We heard the passion in Dana Hutcherson’s voice. She’s the Flow Coordinator for the Endeavour launch. What that means is she basically prepares everything for the shuttle launch – from start to finish.
Her words were inspiring for anyone who has a young daughter, including me. You see, Dana is one of three female Flow Coordinators at NASA. My little Molly will be hearing about Dana when I return to Wisconsin.
What discussion about NASA’s space program is complete without a visit from a real-life astronaut? Enter the charasmatic, funny and brash Clay Anderson. This Nebraskan (with a stop at Iowa State along the way) was arguably the life of the Tweetup.
While he didn’t delve too deeply into what the future holds for manned space missions, his passion for NASA and its army of experts, was on display in full, complete with a blue astronaut jump suit.

Two-time shuttle astronaut Clay Anderson was the life of the Tweetup.

Faith. Passion. I’m beginning to see why so many are so enamored with our space program and fascinated by how NASA ticks. They’re a blueprint for how to operate – from complicated science, mathematics and physics – to public affairs, communication and social media.

There’s more to come here on NASA Tweetup, including the amazing participants, who include a belly-dancing librarian, a three-time Jeopardy champion, a former ER cast member and an inspiring 6th grade teacher.

2 thoughts on “NASA Shares Its Passion With Tweetup Crew”