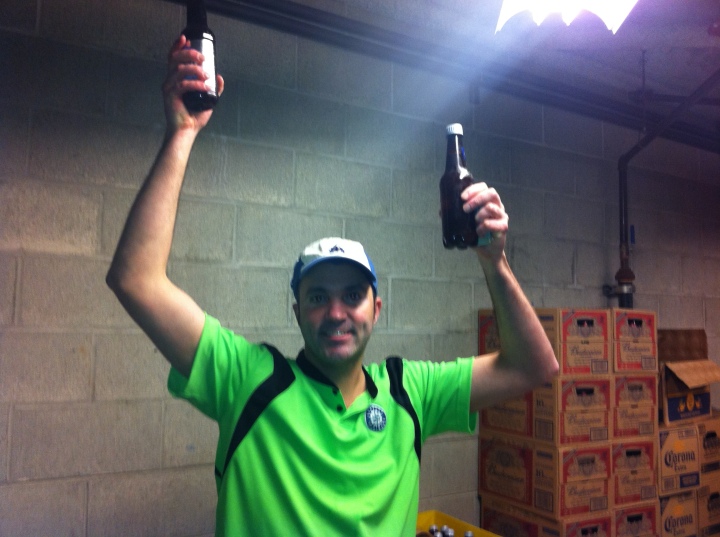 When there’s social media news in the sports world, it’s often at the team, league or player level. Those high-profile characters carry the most weight and usually make the most impact.

That would be Kevin Zelko: Seattle Mariners beer vendor by night and special education teacher by day. He’s one of those rare characters in sports media where a gazillion followers, huge budgets and even bigger egos do not rule. Instead, Mr. Zelko uses Twitter to serve up an engaging and innovative sports fan experience – 22 ounces (and 140 characters) at a time.

Opening Day for @Msbeervendor
Mr. Zelko, who’s been pouring suds for Seattle-area sports fans for five years, decided to give customers something different for the Mariners’ Opening Day game at Safeco Field. He would take beer orders on Twitter via @Msbeervendor.

“My friend, Gregor, and I were on our way to a Sounders game and were discussing how we use our various Twitter accounts and their different personalities,” Mr. Zelko tells FourthAnd140. “It just kind of struck us there was great potential connecting with fans via social media, the ease of an open-source order process, and the fun of the challenge in beer vending on demand.”

What was once just a funny twitter account to make silly baseball comments, became a new way for fans to order at baseball games.

Wait, there’s no tweeting in baseball. At least not for beers. Nobody’s done that before. But then again, this is Seattle, the fifth-most socially networked U.S. city. And it was Opening Day, complete with a tribute to Dave Niehaus, a beloved broadcaster for 34 seasons of M’s baseball.

“Opening day was chaos,” admits Zelko, who received more than 50 @ replies on Twitter from Mariners fans that first night. He delivered on 87 percent of those orders. “I never thought it would attract this much attention.” 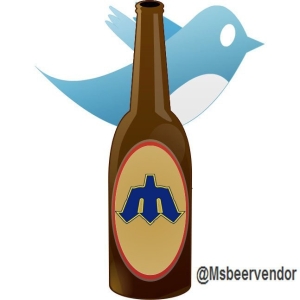 Connecting with Fans
Even on less-crowded nights, there’s plenty of work juggling a full crate of icy beers and your smart phone.

“The customers I’ve serve really like it and are amazed it works as quickly as it has,” he says. “One guy got high fives from his friends who couldn’t believe he just pulled it off when I delivered beers to them.”

Can there be any better reward than delivering cold brew to happy, high-fiving baseball fans? Well, a little extra cash doesn’t hurt.

“The key is connecting with the fans and building regulars who are interested in social media,” says Mr. Zelko, who donated most of his Opening Day tips to help earthquake victims in Japan. “This will, of course, build business and better sales.  The tips aspect is merely up to them.”

An Experience for Every Fan
Mr. Zelko also points out his Twitter service is a perk any fan can enjoy, which is exactly what Twitter delivers every day – when used properly – to its millions of users. It’s fantastic at leveling the social – and sports – playing field, and connecting people from all over based on a common idea, cause, event or purpose.

“This idea makes it so any fan – in any seat – can enjoy ordering to your seat,” Zelko says. “It’s not just for those in the VIP seats in the Diamond Club.”

Support From the Top
Like so many great ideas in social media, this one did not come from some ROI-driven marketing department or overpriced advertising agency. It was authentic, original and brilliant, and Mr. Zelko was thrilled when Centerplate, the vending company serving Safeco Field, green-lighted the idea.

“We discussed how to make this work where everyone wins,” he says. “I was impressed with their support. I think they see the potential here.”

Not For Everyone
Does Zelko expect other beer vendors to follow in his tweet-steps? Maybe. But this is not an easy job to begin with, and adding work to an already labor-intensive occupation may not be everyone’s cup of beer.

“It’s pretty grueling carrying 60 beers and a tub of ice up stairs while trying to find your next sale,” Zelko says. “I just had ACL surgery, so I wasn’t so sure I was gonna be game ready. It’s working so far.”

Zelko appreciates even more what vendors provide to a fan’s game-day experience.

“Some have been vending for 20 years and are still kicking,” he says. “They’ve experienced baseball when Rod Carew was playing. That’s something to be proud of.”

As for other vendors thinking of using Twitter to connect with customers, Mr. Zelko’s advice is simple and authentic, much like his idea.

“Be innovative,” he says. “Get a good beer call that goes with it.  Be socially media connected. Have fun and work hard.”

Cold Beer! Get Your Stephen Colbert!

Ordering through Twitter is not Mr. Zelko’s only calling card at Mariners baseball games. He’s known to throw out some pretty classic beer calls. (My favorite vendor beer call was at Yankee Stadium in 1988, when I heard one beer man make his pitch with, “Hey alcoholics!”)

Here’s video of that exact beer call from @Msbeervendor, via YouTube.